On my first reading of Virginia Woolf’s Mrs Dalloway, I was captivated. I didn’t know a thing before opening the covers. Its taking place on a single day, its lyric prose, its insights into daily inner life and human interaction seemed to me delicate sweeps of genius, the marks of a masterful writer, and a beautiful thinker, championing originality.

The impression didn’t wear off. Nearly two years, three readings, and a whole A level course later, Mrs Dalloway still stands out as perhaps the greatest work of literature I’ve read to date, and its charm and beauty exert an even stronger power over me, from having ‘plunged’ (as Clarissa Dalloway would say) more deeply into its pages through critical study. Reading Mrs Dalloway was the first step in my Woolfian journey, leading me to her other novels and the brilliant reflections on fiction, especially the female tradition, in her essays and lectures.

And it seems that I make up only a tiny fraction of the obsessed fanbase out there. This year, someone had the genius idea of hosting a Dalloway Day in mid-June in London (when the novel itself takes place), a celebration of this sublime and ground-breaking modernist novel to rival Dublin’s Bloomsday (which commemorates James Joyce’s equally pivotal Ulysses). The instigator was none other than the renowned feminist literary critic Elaine Showalter, whose seminal book A Literature of their Own examines, unearths, and evaluates the history of English women’s writing. Co-ordinated by the Royal Society of Literature, a number of events focussing on Woolf’s much-loved novel took place at various locations across London.

A post-exam treat to myself, I adopted some of Mrs Dalloway’s celebrated independence and hopped on a train from Manchester to London, enjoying Showalter’s book on the journey down. The first event, ‘Looking at Mrs Dalloway’, was a walk-and-talk centred around three paintings at the National Portrait Gallery, led by Alexandra Harris, writer and critic on art of all kinds, and Professorial Fellow at the University of Birmingham. 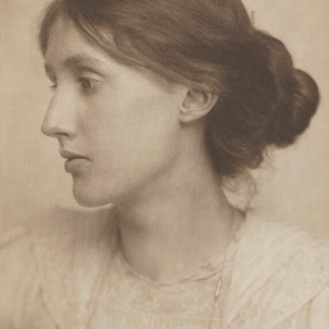 Starting with that iconic picture of Virginia Stephens (above, left), Harris began by discussing Woolf’s own wariness of the fixity which a portrait demands and which can never capture our ‘infinite manyness’ which her novel celebrates. Despite the somewhat ethereal quality of the picture, suggesting an inner effortless genius, we heard of Woolf’s determined commitment to her writing process, her description of writing as like running laps or climbing a mountain, her rigid timetable for the writing of Mrs Dalloway.

Moving onto a post-impressionist painting by Vanessa Bell (above, middle), Harris considered how the characters in this novel are much like shapes in a painting, condensed into essences moving together or apart. The anonymity and featurelessness of this piece suggests and allows for the infinite inner lives which the portrait denies.

Passing a portrait of the king, Harris touched on the novel’s concern with what fame, success, achievement are, and Woolf’s creation of a deep sense that we’re all asking this question. The final stop was a painting of the Memoir Club (above, right), completed after Woolf’s death, where Harris dwelt upon memory in Mrs Dalloway, and how memories in the book make present moments richer, deeper.

Questions brought about discussion of the link between Clarissa and Septimius, Woolf’s comparison of the trauma of war and the trauma of everyday life, and Woolf’s fears about the artistic value of a life ‘so apparently tinselly’ (emphasis on ‘apparently’).

Wandering back through Bloomsbury (and undertaking a blue plaque hunt on the way), I headed over to the British Library for event number two: ‘Walking with Mrs Dalloway’. This time, Alexandra Harris was in conversation with Dame Hermione Lee, biographer of Woolf and Emeritus Professor of English Literature at Oxford University. Their lively discussion of Mrs Dalloway begun with context and was centred around four passages from the novel – their readings, as well as their enthusiastic commentary, brought Woolf’s writing to life with a brilliant energy.

They considered Woolf’s initial intentions for the novel: she wanted to place the ‘sane and insane side by side’, she intended to criticise the social system and show it ‘at its most intense’.

Firstly, we heard Clarissa pausing by the park gates, then her reunion with Peter Walsh, followed by Sir William Bradshaw’s reductive diagnosis of Septimius, and finishing on Woolf’s elegy to the London evening. Discussion focussed on Clarissa’s feeling that it is ‘dangerous to live even one day’, Woolf and Clarissa’s rejection of pigeon-holing people, the idea of a society haunted by the dead, and the recurring imagery of waves and of offering.

Questions focussed on Woolf’s response to Ulysses and the essential reasons for reading Mrs Dalloway. I loved Harris’s idea that the novel shows that ‘things entirely other to yourself are connected to you and are underpinning your experience’.

Whilst waiting for the third and final event, I popped into the Treasures Room at the British Library to see what exciting literary items were on display. I wasn’t disappointed: the only preserved copy of Sir Gawain and the Green Knight; a first edition of Tristram Shandy signed by Laurence Sterne; an early draft of Coleridge’s ‘Kubla Khan’; Jane Austen’s ACTUAL writing desk and a poem to her brother Frank (this one actually induced goosebumps); Emily Brontë’s Gondal poems and Charlotte’s Tales of Angria in their tiny, print-like writing; a draft of Sylvia Plath’s ‘Insomniac’ covered in revisions; and a typed page of Angela Carter’s ‘The Lady of the House of Love’ (my favourite story from The Bloody Chamber) with many pen alterations. Also on display, appropriately and I think not by accident, was Woolf’s first notebook for what was then The Hours (the working title for Mrs Dalloway), which intriguingly opens with Peter Walsh.

Finally, the showstopper: Hermione Lee in conversation firstly with Alan Hollinghurst, Elaine Showalter, and Sarah Churchwell. The audience was larger than the previous events, and anticipation buzzed around the room – this felt like the climax.

Alan Hollinghurst talked engagingly about Woolf’s influence on his writing, which readers are potentially more aware of than writers themselves. He also dwelt on Woolf’s relevance and revitalisation in the 1960s. Elaine Showalter and Sarah Churchwell discussed their own engagement with Woolf and her importance in their careers, their favourite passages, and their theories about why Mrs Dalloway is still so brilliant and relevant.

This time, questions prompted discussion of why Mrs Dalloway is brilliant for ‘anyone who just loves language’, Woolf’s mastery of the semi-colon, and the lack of critical consensus on Mrs Dalloway’s morality. The first question, as before, focussed on Joyce’s influence on Woolf, and was, again, unsurprisingly, posed by a man. Whilst Ulysses was an important and relevant literary event, I really hope that the day showed some readers (and reaffirmed to many) that the most important, thrilling, and brilliant aspects of Mrs Dalloway are not its parallels with and deviations from this male masterpiece. 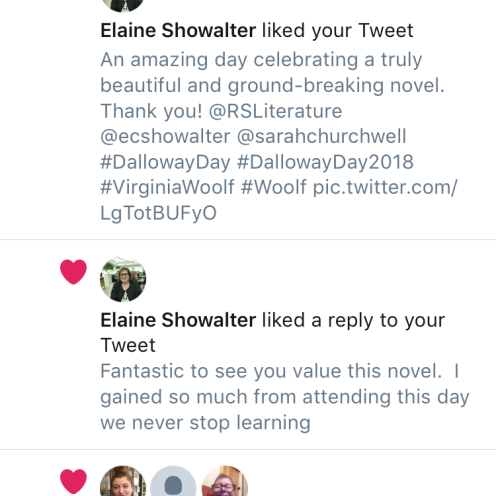 Wandering back to Euston after totally fan-girling over Elaine Showalter signing my book, my main thoughts were how wonderful it was that Woolf wrote so much about writing, and how much we can learn from what she communicated under the heading of fiction and otherwise. I’m very much looking forward to next year.